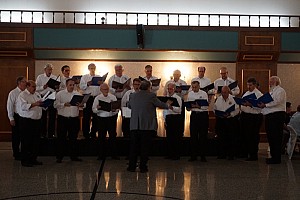 With the blessing of His Grace Bishop Irinej, on April 30th, 2017, the St. George North Canton community hosted a series of events in support of St. Vladimir’s Seminary, beginning first with an alumni gathering in their Event Center lounge sponsored by St. George Slava kumovi Ken and Jeanine Kozak. Surrounded by elegant decorations, priests came from parishes in Ohio, Pennsylvania, and West Virginia to enjoy fellowship and share stories from their days at seminary.  The lounge opened for a general reception one-hour later with other clergy and laity joining the St. Vladimir’s alums for pre-banquet fellowship and hospitality offered by the parish kumovi.

Shortly thereafter, the guests entered the main hall to begin the Gala Fundraising Banquet in support of St. Vladimir’s Seminary.  The program began with the entrance of His Grace Bishop Irinej at 6pm, who was greeted by Kosovo Choir at the door.  After a brief welcome from the Master of Ceremonies, host-priest Fr. Aleksa Pavichevich, the Kosovo Choir offered the day’s first performance.  With powerful voices, they sang a selection of liturgical music and classic Serbian folk songs.

All guests were then given an opportunity to enjoy a meal prepared by the in-house caterers - Generations Catering. Named in honor of the generations of Orthodox servants who had long catered for the St. George community, the meal included a delicious selection of beef, chicken, sarma, and side accompaniments.

After the meal was finished, the program progressed to the first speaker of the evening, the Very Rev. Protopresbyter Michael Corbin, parish priest of St. George Antiochian Orthodox Church in Canton, Ohio, and St. Vladimir’s alumnus. He began with a reflection on the humility he learned at St. Vladimir’s, which started with his first community service assignment - washing dishes in the refectory. His love for St. Vladimir’s was evident in his genuine and thoughtful reflection.

Fr. Michael then introduced the first keynote speaker of the evening, the Very Rev. Protopresbyter-Stavrophor Chad Hatfield, President of St. Vladimir’s Seminary.  Fr. Chad spoke of the historical witness that St. Vladimir’s has offered with regard to the development of Orthodoxy in this country. In particular, Fr. Chad emphasized the importance that the seminary has continually placed on maintaining rigorous academic standards in conjunction with a full and robust liturgical life. Together, Fr. Chad offered that the totality of the seminary experience is formational - St. Vladimir’s strives to form seminarians that will bear witness to Christ in the context of this challenging, ever-changing world in which we live.

The middle of the program featured a Romanian violinist Cornel Zotta, joined for a duet by his daughter Anna. They began with a classical selection with “Sonata No. 2” by Jean-Marie Leclair, before picking it up a little with the famous violin duet, “Concerto for 2 Violins” by J.S. Bach. To the delight of the audience, they closed their performance with three Celtic pieces.

The Very Rev. Protopresbyter-Stavrophor Dan Rogich, parish priest of Holy Trinity Greek Orthodox Church in Canton, then offered an introduction of the second keynote, His Grace Bishop Irinej.  Fr. Dan reflected on his experience at St. Vladimir’s while weaving in a beautiful reflection on His Grace’s seminary formation.

The audience then enjoyed a tremendous oration by His Grace, the Right Reverend Bishop Irinej.  His Grace reflected on his personal encounter with both St. Tikhon’s Seminary and St. Vladimir’s Seminary. In a particularly profound moment, His Grace shared the story of a blessing he received from St. Nikolai Velimirovic while still in his mother’s womb. He then transitioned his oration to the impact of St. Nikolai on the life and development of St. Vladimir’s Seminary, and, more generally, how St. Nikolai’s brilliant articulation and theology of ‘personhood’ impacted the great theologians of the modern age - and of the seminary. Although the talk was steeped in rich Orthodox theology, it was delivered in a manner that was accessible and impactful for all banquet guests.

His Grace Bishop Irinej was followed immediately by the Gracanica Folklore Group of St. Archangel Michael in Akron, Ohio, bringing their vigor and youthful energy to this gala event. Following their performance, while the children took a picture with their diocesan bishop, Gracanica’s choreographer Vinka Zoric was inspired to sing a beautiful Serbian folk hymn in a classic style.  After His Grace explained the origin of this music to the audience, Vinka volunteered to lead a class in teaching this style of music to those in her parish community.

Fr. Chad Hatfield returned to the stage to present a hand-painted icon of St. Vladimir to the St. George parish community, a gift that reflected the deep bond that exist between the parish and the seminary.  St. George sent four of its young men to St. Vladimir’s for their priestly formation:  Fr. Pete Pritza, Fr. John Zdinak, Fr. Dan Rogich, and Dn. Larry Soper. In addition, the bond strengthens each year as the community makes an annual pilgrimage to St. Vladimir’s for a Lenten reflection. Church Board President Nick Pribich came to the podium and spoke about the impact the recent trip to St. Vladimir’s made on him and all those who made the journey.

The evening wrapped up with a summary by Alex Machaskee, Executive Chair of the St. Vladimir’s Board of Trustees. He thanked all those present for their support of the seminary, and he thanked His Grace in particular for his support in the continued growth of the seminary community. He highlighted the historic connection between the Belgrade Theological Faculty and St. Vladimir’s, noting that with the leadership and support of His Grace Bishop Irinej this connection would develop into a profound, working relationship.

By evening's end, and through the generosity of those gathered and those who sponsored the event, the seminary raised a significant amount of money. Those gathered left with an abundance of love and affection for this institution that has long been a witness for Jesus Christ and Orthodox Christianity. 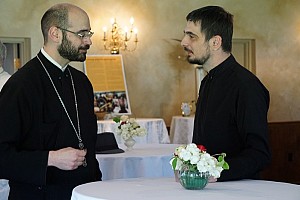