Patronal Feast of the City of Belgrade 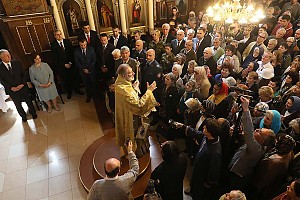 Holy Liturgy was presided over by His Holiness the Serbian Patriarch Irinej with the concelebration of Their Graces Bishop Irinej of Eastern America and Antonije, Vicar Bishop of Moravice. The Bishop Irinej pointed out in his sermon that the Feast of the Ascension was the feast connecting heaven and earth.

After the Divine Liturgy, followed by the bells of the church of the Ascension, the procession was organized through the streets of the capital city, with the participation of His Grace Arsenije, Bishop of Toplica; the host of the patron event Deputy Mayor of Belgrade Mr. Andreja Mladenovic; City Manager Mr. Goran Vesic and other representatives of the City of Belgrade; Prince Aleksandar and Princess Katarina Karadjordjevic; Chief of the Office for Religions in the General Staff of the Serbian Army, Colonel Sasa Milutinovic and members of all branches of the Army of Serbia; cavalry Police, members of cultural clubs and sports organizations as well as by thousands of pious people.

Prayers for health and salvation of the inhabitants of the capital city were offered during the procession at the Terazije Square (centre of the city), then at the Cathedral of Holy Archangels Michael and Gabriel, and in the churchyard of the Ascension church, where the Patriarch held a homily on the feast of the Ascension and the newly radiating saint Mardarije of Libertyville.

For the first time, the relics of St. Despot Stefan were being carried during the procession. A large number of children for the first time this year joined the Ascension procession being organized under the auspices of the Society the Holy Serbia. The procession was also attended by members of the Church and the children folklore ensemble "Branko" from Nis. 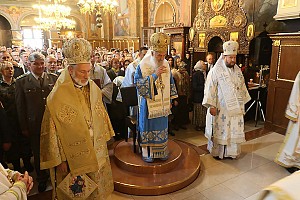 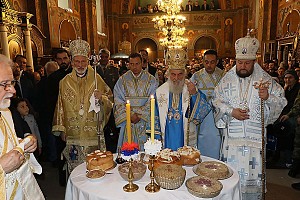