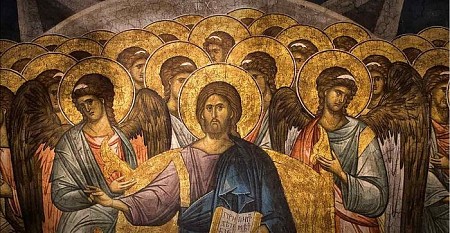 Visoki Dečani, a 14th century Serbian Orthodox Monastery in Kosovo (known as Kosovo and Metohija in the Serbian tradition), has unveiled a new website in English and several other languages.

The long-awaited site contains regularly updated news about the life of the monastery in Serbia’s turbulent breakaway region of Kosovo, along with many scans of materials from the monastery’s library, audio recordings from Divine services, professional photographs of items from the monastery treasury, and an online store from which monastery products can be ordered to be shipped all over the world.

Visoki Dečani (pronounced as Visoky Dechani) is of particular interest both because of its past and its present. Founded by the Serbian medieval king, St. Stefan III Dečanski in 1335, the monastery is the only Serbian monastery to have been continuously inhabited during the dark centuries of Ottoman occupation and subsequent years of communist oppression. This unbroken monastic presence endows the monastery with an immensely rich historical and spiritual treasury, including breathtaking, exquisitely preserved frescoes, intricate centuries-old liturgical objects, and many pages of both beautiful and historically significant manuscripts, all of which can now be viewed online at the monastery’s new website.

There are also numerous articles about the history of the monastery and the life of the monks today. The monks maintain a full cycle of services, and combined with the wondrous, other-worldly splendor of the 14th-century church, they are truly an exemplary expression of the richness of the Orthodox monastic and liturgical tradition. The monastery also produces icons, woodcarvings, wine, brandy, and cheese, and is very active in humanitarian work in the local Serbian enclave villages.

The monastery’s recent history is a continuation of the same fortitude that the brotherhood has shown throughout history. The brothers endured war, bombings, and sieges in the 1990s during the Kosovo War, during which the monastery gave shelter to hundreds of people of all ethnicities and religious convictions. Following the War, the monastery has entered a new period of externally-imposed isolation due to the new political situation, which has rendered the immediate area around the monastery unsafe due to the local villages being hotbeds of Kosovo-Albanian ultra-nationalism and Islamic extremism. Having been attacked with mortar-grenades on several instances following the War’s end in 1999 (without suffering serious damage) and with Wahabbi extremists loaded with weapons being stopped at the monastery gates as recently as two years ago, the Monastery remains under armed NATO led peacekeeper protection. It is surrounded by high walls outside of which the monks cannot move freely, and those entering must be checked by the soldiers.

Yet, despite the difficult circumstances in which they continue to live, Dečani Monastery has grown to be one of the largest monastic brotherhoods in the Serbian Church and is an example of flourishing traditional coenobitic monastic life. The isolation amid pervading ethnic and religious intolerance and the lack of rule of law and order provides nevertheless ample opportunity for prayerful silence, and the blessings of Dečani are evident to all who make the trip to visit. In a region with a painful past and continuing political and economic instability, the monastery shines forth as a beacon of the peace which passes all understanding, with the endurance of the monastery and its brothers through the centuries of troubles as a powerful witness to Christ’s glorious triumph over death. Despite all these challenges, it is not unusual to see visitors of different ethnicities and religions from all over the world visiting this renowned UNESCO World Heritage Site, one of the best preserved of its kind in South-Eastern Europe.

The new online store makes the products of isolated Dečani Monastery available to all throughout the world. There, you can support the monks in their monastic struggle by buying their unique monastery-made products, including their wine from centuries-old vineyards, hand-painted icons, hand-carved wooden crosses, a CD of their chanting, as well as books about the monastery and its history and souvenir items. Due to security difficulties and the hostility of the local population towards Orthodox Christianity, the internet is a very necessary means by which the monastery can get the support it needs to continue on.