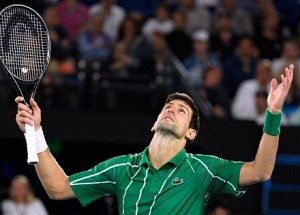 Tennis superstar Novak Djokovic is through to the Australian Open final after beating an injured Roger Federer in a semi-final showdown on Rod Laver Arena last night.

Currently ranked number 2 in the world, Djokovic player is a well-known Orthodox Christian, who regularly wears a wooden cross around his neck. He’s known for praying through his matches as does his wife – a practice sports commenters observe with interest:

A proud Serb, Djokovic is a member of the Serbian Orthodox Church. However, after his Round 4 match of the Australian Open in 2009, Djokovic discovered the support of the wider Orthodox family, when supporters of Greek Cypriot player Marcos Baghdatis – a Greek Orthodox Christian – chanting his name.

“I have never experienced anything like this before in my life where my opponents team is chanting my name… we are Orthodox brothers,” an emotional Djokovic told Jim Courier in his post-match interview.

In July last year, she took out the Women’s Championship and Djokovic took out the Men’s, causing some media commenters to dub it an “Orthodox Wimbledon” and discuss the impact eastern European Christians have had on the tennis world.

Djokovic occasionally jokes about his devotional practices with comments like how he prays for “plus fours” when he plays the card game Uno, there’s no doubt the player takes his faith very seriously.

In 2011, he received the Order of Saint Sava – the highest honour bestowed by the Serbian Orthodox Church – for his generosity and dedication to the religion.

“This award is certainly the most important I’ve ever got,” said Djokovic. “As an athlete and a religious person, it is hard for me to find appropriate words to describe my feelings of gratitude for the confidence I gain from the Holy Synod. I can only say that it can be earned only with hard work and self-belief, belief in your loved ones and in God.”

The Russian Orthodox Church also honoured Djokovic with a 2012 award for “Outstanding Activity in Strengthening Unity of Orthodox Christian Nations and for Consolidation and Promotion of Christian Values in the Life of Society.”

But for Djokovic and his wife Jelena, what matters most is using Djokovic’s influence and wealth to benefit those who need it the most – whether that means: rebuilding schools destroyed by natural disaster; donating to save a chapel in France; opening a restaurant with free food for the homeless and those in need; or working through the foundation his family established in 2007, which focuses on early childhood development by providing preschool education for underprivileged Serbian children.

“Right now, Novak has the power and the voice to raise the awareness and raise the funds for investment in preschool education programs and in the future we might not have this power,” Jelena told CNN.

And though Djokovic’s fame comes with the cost of being “on the radar” all the time with social media, Djokovic says this is an opportunity and a privilege, not a burden.

“Everything that you say, that you do is monitored… big brother,” he said. “Some people may look at that as a burden but I look at it as a great privilege and actually a great opportunity to use your platform to do something. To create a change that will be positive.”

“I think that athletes have huge power to change the world, as Nelson Mandela said, and I think that power can be used in a very positive way.”