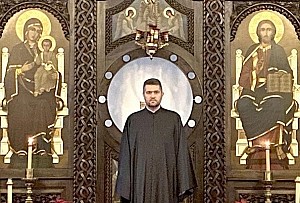 His height might be imposing were it not for his soft-spoken voice and ability to connect with the younger parishioners at St. Nicholas Serbian Orthodox Church in Westmont.

“He is young and not only able to actively participate in the services, but also aware and active in other aspects of our church,” said Nevin Zimmerman, a newer member of the church.

“The fact that he is not so much older than me is great to have.”

Dragovic left his native Serbia in southeastern Europe in 2014, when called to serve in Salt Lake City. Two years later, he was again asked to move to another congregation, this time to serve in Johnstown.

He took some time searching the internet for information on this new city and his new church, looking for clues as to what they might be like.

“I read some article about our Serbian church and it said they are the friendliest Serbian church in the United States,” said Dragovic, who lives with his wife, Dragana, and their three sons, Vasilije, 15; Justin, 10; and Teodor, 3.

“When I came here, I found that they really are the friendliest people that I had encountered.”

The priest said he and his family still feel welcomed by the church and community – and that is what they want to make sure every newcomer or person who has attended regularly feels.

“It is something that every guest who comes to our church for Divine Liturgy or for a fish fry says that they feel very comfortable with our church, that we are very good hosts,” Dragovic said.

‘A calling from God’

In Utah, Dragovic said, he did not experience much diversity. Except for his neighbor, the majority of his town, indeed the state, was mostly one religion and one ethnicity. However, he said, his experience with Johnstown was much different.

“I am amazed with Johnstown,” Dragovic said. “Here you can find huge diversity where people have come from all over, like Europe, and you can find a good relationship between people,” said Father Milan. “It is a place where you feel everyone is your family.”

Parishioner Suzette Gardenhour, of Westmont, was the first to meet Dragovic.

She and her husband, Richard, picked him up at the airport when he first came in.

They also spent a week together in Serbia last summer with his family.

“It was very heart-warming and emotional.”

Dragovic knew he was called to serve after high school at a meeting with a monk who was on vacation in his hometown of Kursumlija. The monk talked to him about many different aspects of theological seminary.

“It was really a calling from God,” he sad. “I was raised in a faithful family with strong church tradition. After speaking to him, I went to visit Mount Athos, where the monk was from, and I spent a month at the monastery Hilandar.”

He then entered the University of Belgrade Theological Seminary in Belgrade, the capital of Serbia.

“It was a beautiful time of my life where I matured,” he said.

Dragovic spent 10 years in Nis as a priest before he traveled to the United States. He is often asked why he made this decision.

“When you are a Christian, every place you are a stranger because your home is the kingdom of heaven,” the priest said. “When you have faith, it is much easier to come here, and travel wherever you want.”

Dragovic brings to his church not only a fresh young perspective, but also the Serbian heritage with which most of his parishioners have no first-hand knowledge. Many of them are fourth-, fifth- or even sixth-generation Serbian and European immigrants.

“We are proud of our Serbian roots,” Dragovic said. “I see the future of our church to have open doors for all of the Johnstown community and for those who want to find peace and love for one another, and who want to find the truth in our Lord Jesus Christ.”

Dragovic said not everyone who attends the church is of Serbian descent.

Zimmerman’s wife, Victoria, is not Serbian. They became official members last year and Dragovic officiated at their wedding in October. Zimmerman and his wife travel from Morgantown, West Virginia, once a month to attend services and participate in a fundraiser to repair the church bell tower.

“I always liked the environment of the church,” Zimmerman said.

His mother is a member of the church.

“It is open and accepting,” he said. “I grew up in this church and it was always a fun place, because my father was inspired as a child to pursue his career as an iconographer because of this church.”

His father, Philip Zimmerman, is a local artist who was inspired on a class field trip to the church when he was 12. The icons are an important part of how parishioners venerate God and his saints, and St. Nicholas has several examples of important icons on display.

In his spare time, Dragovic pursues singing – both as a hobby and as part of keeping Serbian traditions alive.

“I was in a folk and traditional group in Serbia,” he said. “They played different instruments. I was more of their singer, but it is my joy and my love. Every time I have a little bit of peace, I sing and learn something new.”

Gardenhour said she has been a Serbian Orthodox Christian all of her life.

“I hope he will bring together our church and give it more longevity than we had hoped.”

Roxanne Tuinstra is a freelance writer living in Johnstown.

Father Milan Dragovic, a native of Serbia, has been the leader of the congregation at St. Nicholas Serbian Orthodox Church in Westmont since 2016.

ROXANNE TUINSTRA/ FOR THE TRIBUNE-DEMOCRAT