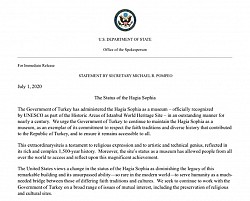 U.S. Secretary of State Mike Pompeo urged Turkey’s government on Wednesday not to violate Hagia Sophia’s status as a UNESCO World Heritage Site and maintain it as a museum.

Built in 537 by the Byzantine Emperor Justinian I, Hagia Sophia once served as the seat of the Ecumenical Patriarch but was converted into a mosque when Constantinople fell to the Ottoman Empire on May 29, 1453.

Turkey’s first president, Kemal Ataturk, secularized Hagia Sophia and opened it as a museum in 1935. In 1985, UNESCO designated the site — as a component of the Historic Areas of Istanbul — a World Heritage site.

The Government of Turkey has administered the Hagia Sophia as a museum – officially recognized by UNESCO as part of the Historic Areas of Istanbul World Heritage Site – in an outstanding manner for nearly a century.  We urge the Government of Turkey to continue to maintain the Hagia Sophia as a museum, as an exemplar of its commitment to respect the faith traditions and diverse history that contributed to the Republic of Turkey, and to ensure it remains accessible to all.

This extraordinary site is a testament to religious expression and to artistic and technical genius, reflected in its rich and complex 1,500-year history.  Moreover, the site’s status as a museum has allowed people from all over the world to access and reflect upon this magnificent achievement.

The United States views a change in the status of the Hagia Sophia as diminishing the legacy of this remarkable building and its unsurpassed ability—so rare in the modern world—to serve humanity as a much-needed bridge between those of differing faith traditions and cultures.  We seek to continue to work with the Government of Turkey on a broad range of issues of mutual interest, including the preservation of religious and cultural sites. 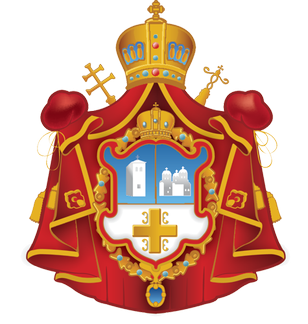