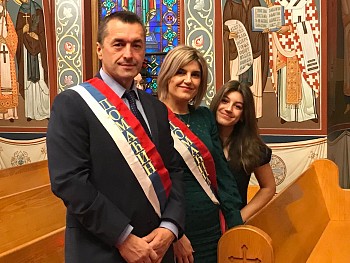 While nothing can surpass the joy that the feast of the Nativity of Christ brings to the faithful, the celebration of His Grace, Kyr IRINEJ at the parish slava augmented that joy in Lackawanna, New York. Welcoming their father and Archpastor of the Eastern American Diocese of the Serbian Orthodox Church for the feast of the Holy Protomartyr and Archdeacon Stephen on Sunday, December 27, 2021/January 9, 2022, the parishioners of St. Stephen Church joyfully observed the third day of Christmas simultaneously with the commemoration of their patron saint.

Vladika IRINEJ arrived in Lackawanna on Saturday evening to preside over the vespers, served by local clergy, Protonamesnik Vladislav Golić and Deacon Steven Gjurich, and visiting Deacon Daniel August, from the parish of the Holy Prophet Elijah in Aliquippa, Pennsylvania. Ten voices of the combined weekday and Sunday choirs sang the responses under the cheerful leadership of Protinica Victoria Trbuhovich.

The hosts for the slava, Dragan and Milena Drča, and their children Sofia and Miloš, greeted His Grace when he arrived at the church on Sunday morning, with Sofia’s offering him a warm welcome and presenting him a bouquet of flowers. The Kosta Manojlovich Choir, with their directress, Diane Sullivan, provided a prayerful atmosphere amidst the frescoes, which, as His Grace taught during a previous visit, make the walls invisible, so that the worshippers are united with the heavenly inhabitants who celebrate the Divine Liturgy together with those on Earth. 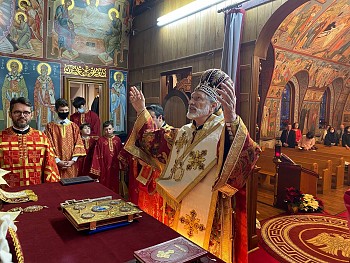 During his homily, full of love for his flock, Vladika reminded the faithful of the love of the mothers whose 14,000 infants gave up their lives for the sake of the newborn Christ. In recounting the stoning of Saint Stephen, he expanded on the martyr’s well-known prayer that God not “charge them with this sin.” With accounts from Holy Tradition, His Grace described the horrible scene of Saul’s holding the cloaks of the mob while they hurled stones at his relative, the Archdeacon. Vladika taught that, through the prayers of the Holy Archdeacon and Protomartyr Stephen, God’s forgiveness of those who stoned him enables all believers, together with the Holy Apostle Paul, to go forth as witnesses to the Savior who has come into the world to save all who confess Him.

After the liturgy, a children’s choir awaited His Grace in the parish cultural center, where they sang the prayers before the blessing of the meal: Roždestvo Tvoje (Thy Nativity) and the troparion to St. Stephen (in English). Popadija Sara Golić, Protinica Victoria Trbuhovich, and Diane Sullivan prepared the children to present various songs in Serbian and English, and the Vranjes siblings, Christina, Michael, and Matthew, taught the instrumentalists. The program included the beloved “O Who Loves Nicholas,” pieces for tamburitza as well as violin, cello, and accordion, and a moving lyrical rendering of the role of the new martyrs of Kosovo.

Father Vladislav encourages the incorporation of singing into the church school curriculum as a means of teaching both the Faith and important cultural-historical themes that promote the preservation of the ethos of the Orthodox Serbs. Through the religious and cultural education of the children, the parish is able further to share that ethos with others who join the parish community in their love for the Orthodox Faith.

The faithful of St. Stephen Serbian Orthodox Church in Lackawanna are grateful to His Grace, Kyr IRINEJ for his Archpastoral visit and for his prayers before the Christ Child, and in turn pray, Many Years to [our] Master! 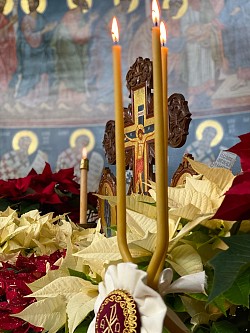