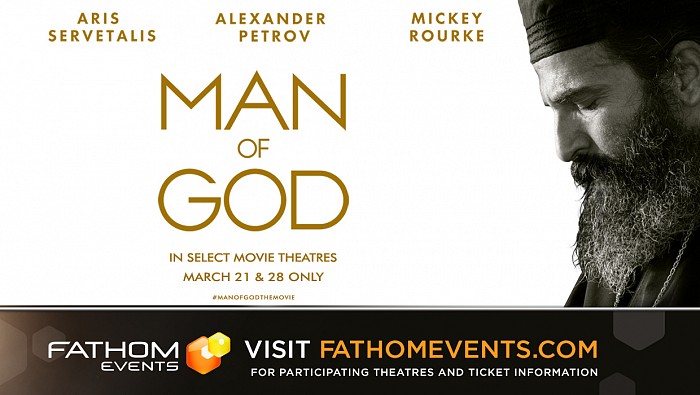 “Man of God,” the award-winning movie about the inspirational life of our beloved Orthodox saint, Saint Nektarios of Aegina was a box office success on the first night of its two-night-only release, finishing in fourth position among the top-five highest grossing films, behind “The Batman”, “Jujutsu Kaisen 0” and “Uncharted” on Monday, March 21.

“Man of God” was originally scheduled to be released in select theaters nationwide for one night only (March 21). But, due to popular demand, Fathom Events added another showing, on March 28.

Don't miss this last opportunity to gather your families and friends together to experience this beautiful film on the big screen.

You can find a theatre near you and get your tickets now HERE!

You can watch the “Man of God” trailer HERE!

Exiled unjustly, convicted without a trial and slandered without cause, St. Nektarios of Aegina’s life was one of persecution and prosecution. A priest of the common people, St. Nektarios’s popularity provoked the jealousy of the clergy in Alexandria and, as a result, he was defrocked and expelled from Egypt. In contrast to his religious “superiors”, Nektarios cared for the poor, taught peasant girls to read and write, and performed miracles. Even his last moment on earth was used to help another: upon his death, Nektarios’ undergarment was removed, and as it fell upon a paralyzed man in the hospital bed next to him, the lame man miraculously arose to walk. So, too, do we hope MAN OF GOD will awaken the paralyzed faith in audiences around the world.

Nektarios was recognized as a saint in the Eastern Orthodox Church in 1961, and his feast day is celebrated Nov. 9. The music for the film was composed by two-time French Cesar winner Zbigniew Preisner with special performance by Golden Globe winner Lisa Gerrard.