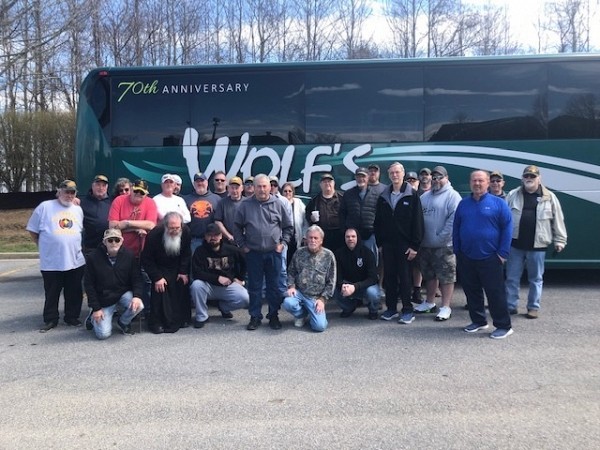 Coal miners have been on strike at Warrior Met in Alabama for a year due to unfair labor practices. On April 6, 2022, a caravan of supporters on more than forty buses from numerous states and Washington D.C. travelled to McCalla, Alabama.

Representatives from a wide-range of unions were in attendance in support of the United Mine Workers of America at the rally at Tannehill State Park. Teachers, airline pilots. airline attendants, electrical workers, steelworkers, boilermakers, the Poor Peoples Campaign, communication workers and teamsters were present along with the AFL-CIO and many other groups.

Protopresbyter-Stavrophor Rodney Torbic was on one of the three United Mine Workers’ buses from Uniontown, Pennsylvania joining the caravan. Father Rodney has had the Archpastoral Blessing of His Grace Bishop Irinej to participate with the miners in support of improved labor practices.

Protopresbyter-Stavrophor Rodney Torbic was made an honorary member of the United Mine Workers of America several years ago. During that time, his fruitful ministry to them included:

Doing opening and closing prayers at the Robena Memorial in Carmichaels each December 6 since 1999, with only two exceptions. 37 miners died in the disaster in 1962 and attended Farmington Memorial several times and gave closing prayers on two or three occasions. 78 miners died in 1968. Visiting mine site on April 7, 2010, after Divine Liturgy while rescue attempts were underway in Montcoal, WV. The explosion on April 5 killed 29 miners. Providing a television station asked me to give messages to awaiting families.

Providing invocations and blessing food at pensioners' picnics; prayers at retirements or other recognition events; attending dedication of the Mine War Museum in Matewan, WV; setting up a parish exhibit was set up at the weeklong Annual Coal Show exhibit center in the fire hall in Carmichaels for several years; marching or rode with miners in the Labor Day Parade in Pittsburgh the largest Labor Day Parade in the country; attending Labor Day picnics in Washington, PA and Mannington, WV; giving prayers at Westmoreland County Labor Council Dinner; as well as attended viewings of departed miners.

Listing prayer requests for miners in the weekly bulletin; setting up a miners' corner in the parish hall with an icon of St. Nicholas and an icon of the Three Youths in the Fiery Furnace. The largest mine disaster was in Monongah, WV, on December 6, 1907. More than 350 miners died in Monongah. Thirty-seven miners were killed on December 6, 1962, at Robena Mine in Pennsylvania. On December 19, 1907, 239 miners died in Jacobs Creek, PA.

Sending letters to mine union offices remembering explosions on their anniversaries and noting such anniversaries in parish bulletin. Many parish families had a family member die or get injured in a mine.

His Grace and the entirety of the God-protected Diocese of Eastern America offer their gratitude to Protopresbyter Rodney for his years of selfless pastoral labor and devotion to those who are in need. May our Lor, God and Savior Jesus Christ richly reward his for his outpouring of pastoral love in action.