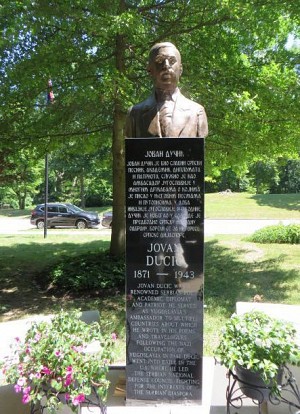 Ducic (1871-1943) was one of the most distinguished Serbian poets, writers, diplomats, patriots, and members of the Serbian Royal Academy. He was born in Trebinje, which was at the time a part of the Ottoman Empire, today Bosnia and Herzegovina. He earned his Teacher’s Degree at Teacher School in Sombor and Law Degree at the Faculty of Philosophical and Social Sciences of the University of Geneva in Switzerland. He worked as a teacher in Bijeljina and Mostar before he was appointed to the Ministry of Foreign Affairs in Belgrade, Serbia.

Austro-Hungarian authorities expelled Ducic from the country because of his patriotic poems "Otadzbina" ("Homeland") and "Oj Bosno” ("O Bosnia"). His father Andrija died during the Herzegovinian rebellion in 1875 and was buried in Dubrovnik. His mother, Joka, died in 1900.

Ducic was the first ambassador in the history of Yugoslav diplomacy. He served as a diplomat in nine countries (Turkey, Bulgaria, Italy, Greece, Egypt, Switzerland, Hungary, Romania, and Spain). His last diplomatic service was in Madrid, Spain, when he left for the United States because of the German invasion of Yugoslavia in 1941.

His books of poetry include Pesme sunca (Poems of the Sun), Pesme ljubavi i smrti(Poems of Love and Death), Carski soneti (Tsarist’s Sonnets), Plave Legende (Blue Legends), Gradovi i himere (Cities and Chimeras), and Lyrical Poems; and his novel Blago cara Radovana (Tsar Radovan's treasure), and poetry letters from Switzerland, Greece among others.

Ducic passed away on April 7, 1943, in Gary, Indiana. He was buried at the St. Sava Serbian Orthodox Monastery Cemetery in Libertyville, Illinois. His last wish was to be buried in Trebinje. His relics were finally transferred to Trebinje in 2000.

Jovan Skerlic, literary critic, said, “…Dučić's poems possess much elegance, rhythm, and finesse, but that this suppression of feelings, the transfiguration of his nature, the wish to be different from other poets, the fear of sincerity and directness, the search for symbols at all costs, the eternal seeking for effects which he achieves with combinations of words and sounds – all these give one an impression of cultivated affectation, of strait-laced elegance, and frequently almost pass into mannerism.”

After V. Rev. Dragoslav Kosic and Fr. Nektarije Tesanovic officiated at the dedication of the bust. They were welcomed by the Honorable Machaskee who greeted all guests. Machaskee explained how the Serbian Cultural Garden was founded on October 5, 2008. "The people and land of Serbia inspired the Garden…Originally, the Republics of Serbia and Croatia were joined with Slovenia in a Yugoslav Garden. The Slovenian Cultural Garden was founded in 1932 and later that decade was joined by Serbia and Croatia. The three coexisted peacefully and in harmony in Rockefeller Park until the breakup of Yugoslavia in the early 1900s. At that point, the Serbian and Croatian representation left the Garden, and the Yugoslav Garden was re-dedicated to the Slovenian Cultural Garden." In 2006, Machaskee, President, Publisher, and Chief Executive Officer of the Plain Dealer, Ohio's largest news organization, led the initiative to raise funds necessary to create a new Serbian Cultural Garden.

V. Rev. Kosic talked about the life and deeds of Ducic. Then, with his three daughters, Andjelina, Anastasija, and Teodora, they recited and sang the verses of famous Ducic poems. The audience enjoyed every moment of their great recitals and singing.

A poem by Jovan Ducic:

They carry your sun on the banners now,
You live in the wrathful pride of your sons;
The luminous skies of yours we've taken with us,
and the dawns to shine on the roads of dreams.

You are still with us, holy mother, tormented;
All lightning of yours are in the glint of the swords;
All the rivers of yours roar in our blood,
and all the winds in our vengeful wrath.

We're part of your being, and your fate,
The beat of your heart in the space. Eternal,
your misfortune is written on the forehead of your son,
On his sword is the word of yours, passionate, unspoken.

With the milk from your breasts you have poisoned us,
in the pain and glory to be the first;
For the two twins that you have brought to this world-
are the martyr and hero, the drop of tear and blood.

You're the sign in the sky and the light in the night,
Cradle and graveyard, in the garment of the sun;
You're the bitter oath to the suffering and might,
The only road that leads us to the top.

We're your trumpets and victories, the waves
of your sea of fire, and the rivers of the sun:
We are, our good mother, the ones that gave you
all the drops of our blood for the one drop of your milk.

Translation from the Lyrics Translate