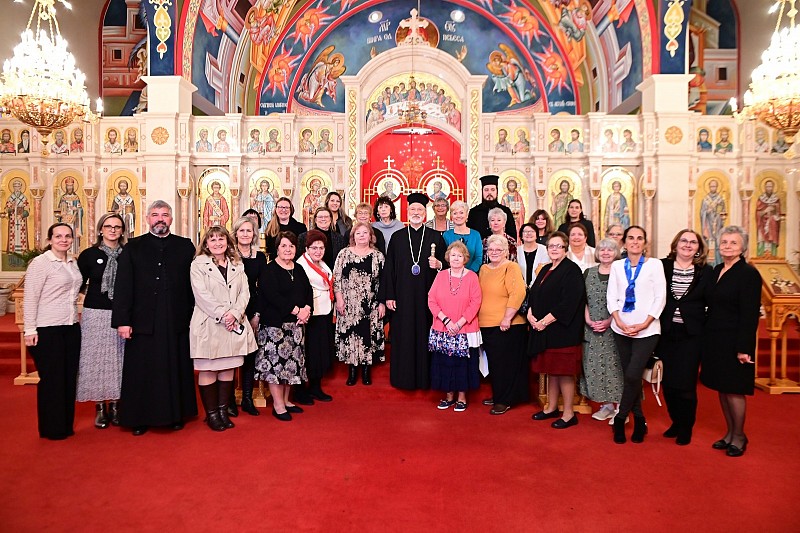 On Saturday, November 12, 2022, the Federation of the Circles of Serbian Sisters (FCSS) of the Eastern American Diocese held its semi-annual meeting at the Community Center of the Holy Archangel Michael Church in Akron, Ohio.

On this important day, our Serbian Orthodox Church commemorates several of its own saints, namely, the Holy King Milutin of Serbia, the Venerable Theoctist (former King Dragutin of Serbia) and Elizabeth (former Helen of Anjou, Queen of Serbia), as well as the Holy Confessor Varnava of Hvosno (first American-born Serbian Bishop, born in Gary, Indiana).

The well-attended meeting was chaired by Millie Radovick, President of the FCSS, and generously hosted by the St. Petka Circle of Serbian Sisters of the Holy Archangel Michael Church in Akron, Ohio. One of the key discussion points was its very successful 2022 St. Sava Camp Season at our Most Holy Mother of God Monastery Estate in Shadeland, Pennsylvania. The operation of the camp is truly the annual flagship project of the Federation.

That which made this season particularly outstanding was this summer camp was the first, following a COVID 19 induced two-year hiatus. There were a good number of campers of all ages, well-versed counselors, parents who eagerly assisted in every aspect of camp life, a diligent group of fathers from Windsor, Ontario, who lent a strong hand to fix many issues, which arose from the closure of the past two years. As ever, the Federation, together with the Shadeland Management Committee, oversaw all the needs and operation of the Camp. Special attention was paid to giving as much outdoor time as possible and extra hygienic measures were introduced to keep our campers as safe as possible. Thank God, no one contracted Covid!

The crowning of the camp season was the celebration of the Patron Saint of the Shadeland Estate, the Venerable Mother Angelina of Serbia. The day began with a Hierarchical Divine Liturgy, to which the campers rendered the responses with their angelic voices. Everyone would agree that this year, more so than ever, the children radiated with exuberance as they performed the end of the camp season program for their wholly captivated audience, delighting every joyously tearful eye with tambura playing, singing, and dancing. To facilitate the participation of more persons, it was suggested that buses could be organized from the neighboring deaneries.

In addition to the regular meeting agenda, Bishop Irinej offered several suggestions for the forthcoming 2023 Anniversary Year which, among all else, marks the 150th Anniversary of the repose of the great Serbian artist and philanthropist, Nadezda Petrovic. She was an instrumental co-founder of the Kolo Srpskih Sestara, on the Great Feast of the Dormition of the Theotokos, August 28, 1903, in Belgrade. Thus, this year also marks the 120th Anniversary of the Founding of the Circle of Serbian Sisters.

In like manner, the Bishop addressed the need to have more inclusive participation from all five of our Deaneries, by considering the appointing of liaisons to each Deanery from the local CSS, who would report directly to the Federation and coordinate local endeavors through their respective Episcopal Dean.

His Grace also noted, in anticipation, the launching of a Building Fund Campaign for a new monastic facility at the Holy Archangel Gabriel – New Marcha Monastery in Richfield, Ohio.

Following the business portion of the meeting, Protopresbyter Milan Pajic, Parish Priest, provided the Sisters with a tour of the magnificent frescoes, which are now being written on the interior of parish church. Bishop Irinej provided a brief lesson the theology of color and line, and architecture, as it related to the central icon of the Theotokos More Spacious than the Heavens.

The well spent day concluded with a sumptuous festal meal offered by the host Kolo in a tastefully appointed dining area of the Holy Archangel Michael Community Center. 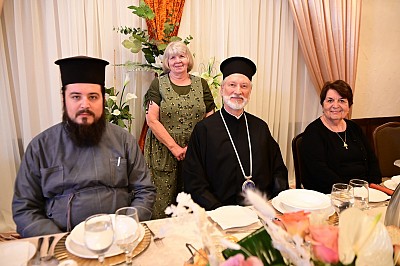