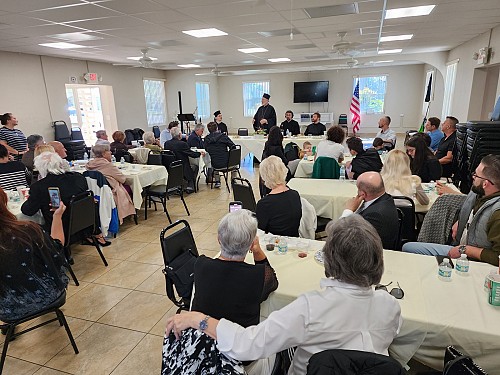 On Sunday, January 15, 2023, the newest parish of the Serbian Orthodox Church was founded in Naples, Florida under the aegis of the Diocese of Eastern America. His Grace Bishop Irinej, under whose omophorion the mission parish was established, celebrated the Hierarchical Divine Liturgy, concelebrated by the Very Reverend Protopresbyter Milan Jovanovic, parish priest of the mission, and assisted by the Reverend Deacon Darko Tripkovic, Diocesan Financial Secretary.

Prior to the beginning of the Liturgy, His Grace set apart and tonsured Michael McDonald, to the rank of reader, at the recommendation of the host pastor. It was a day of new beginnings in so many ways.

During his homily, Bishop Irinej spoke of the meaning of this particular Sunday, which falls in the midst of two Epiphanies, or two dimensions of the same Epiphany: the Nativity, in which Christ reveals Himself in the flesh, and Theophany, when God in Trinity is revealed at the Baptism of Christ, by the voice of the Father and the manifestation of the Holy Spirit in the form of a dove.

Thereafter, as His Grace stated, this day in particular, which follows the Feast of the Circumcision of the Lord and St. Basil the Great, as well as Orthodox New Year, speaks of the newness of life in Christ, who said of Himself, “Behold, I make all things new!” (Rev 21:5). In light of that same newness, the faithful have gathered with their priest around their hierarch, unified as a family, to open a new parish in Naples.

Responses to the well-attended Hierarchical Divine Liturgy were beautifully rendered by singers from the Naples mission parish, capably led by Protinica Zeljka Jovanovic.

Following the Divine Service, at which many of the faithful approached the Chalice to receive Holy Communion, a celebratory New Year’s luncheon was prepared by two local restauranteurs, Aleksandar Radenkovic and Milos Ljubenovic. Entertainment was provided by musicians Zoran Bozovic and Miroslav Tubic.

Following the festive meal, Fr. Milan called the assembly of Naples faithful to order. His Grace opened the assembly with prayer, and reiterated his summons to the formation of a new parish of the Diocese of Eastern America of the Serbian Orthodox Church. The assemblage was joined by the Very Reverend Protopresbyter-Stavrophor Milan Krstic, Dean of the Miami Deanery, in whose jurisdiction the mission parish falls.

Bishop Irinej then invited Fr. Milan to formally present their petition for a new parish by reading the same aloud. His Grace asked to be presented with the list of petitioners to determine if the constitutionally required number of 40 heads of households had been achieved. To everyone’s delight, over double the necessary signatures had been consigned to writing and presented. At this historic point, the Bishop declared the new parish open and explained what the following steps were in order to formalize the same.

Thereafter, His Grace spoke of his desire to find consensus for the naming of the parish. Though this would be his prerogative, as always, Bishop Irinej looks to include everyone in such pertinent decisions, such as the selection of a name. For, as he admonished in his homily, everything was to be done in perfect harmony as a parish family.

The Bishop then spoke of a number of appropriate choices, explaining in detail the historicity and meaning of each, including St. Mardarije of Libertyville, the Feast of Theophany, the Feast of the Meeting of the Lord, and others. From those present suggestions were received, such as St. Basil the Great, St. Tryphon, and the Three Holy Hierarchs.

Bishop Irinej in his remarks also mentioned the special historical meaning for the Serbian people of Sretenje, which is also celebrated as Serbian National Day. For it was on Sretenje that the First Serbian Uprising against the Ottoman occupiers was initiated in 1804, and the first Constitution of an independent Principality of Serbia was issued on Sretenje in 1835, known as the Sretenje Constitution.

At this point the Bishop invited all to rise as Fr. Milan Krstic led everyone in the singing of the Troparion of the Feast of the Meeting of the Lord. After this emotional moment, Bishop Irinej recited the English translation of both the Troparion and Kontakion of Sretenje.

In response to a question regarding the icon of the Feast of the Meeting of the Lord, His Grace explained that this was a combined Feast of the Purification of the Theotokos and the Presentation of Christ. He then explained the iconology of the festal, now patronal icon of the new Naples Mission Parish.

The Bishop invited all in attendance to conclude the meeting by reciting the Prayer of St. Simeon, who held in his arms Christ, brought by His Mother to be presented in the temple, as Joseph bore the offering of two turtle doves. From this encounter, the feast is known as Sretenje, the Meeting of the Lord in the Temple with Simeon the Elder, to whom the Lord gave His word, that he would not depart this life without seeing the Lord’s promise of salvation, witnessed by the Prophetess Anna. 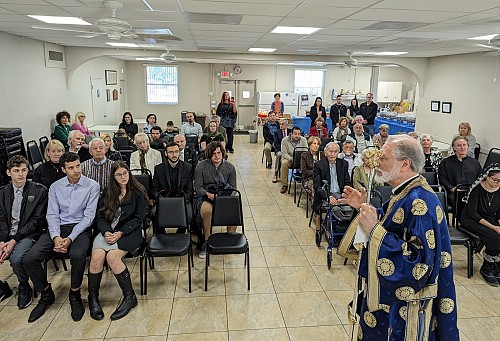 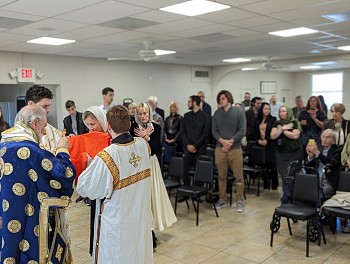